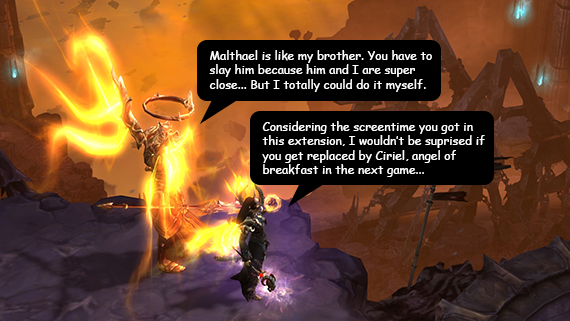 It recently occured to me that the added diversity in gameplay that Reaper of souls introduced to Diablo 3, has strangly made the over experience flatter and kind of bland.

The levels in Diablo 3 are for the most part dynamically generated, allowing for a unique experience every play through. Back in the day, when I played Diablo 2 – which worked in the same fashion – this seemed like a really clever concept. Diablo is a game that’s meant to be played more then once as there are after all five classes and five difficulty levels.

In Diablo 3 Reaper of souls, Blizzard seems to have taken this concept of “dynamicness” and decided to imbue every part of the game with it.

There’s a lot that can be said about Blizzard’s choice for choosing this path.. But one thing is for sure; it does not make for a *immerse* experience. From my point of view, Diablo 3 players enter a game, press some buttons, monsters die. In the next game, it’s the same story: players press some buttons, monsters die. Every game is a little different, because everything is a little random/dynamic. But at the same time, everything also feels as if it’s kind of the same.

Perhaps a fitting analogy would be that a carefully crafted RPG like the Witcher, or good old Nox is like a five course meal with distinct treats at every stage. A game like Diablo is more like a “kapsalon“, a Dutch dish that consists of fries, meats, salad and sauces, all stirred together in one big mess of food. You stick your fork in, and every bite, you get kind of the same collection of flavors.

I wouldn’t say that the new features in ROS are damaging to the game, but they certainly do take it in a new direction that I’m not quite sure what to think off.