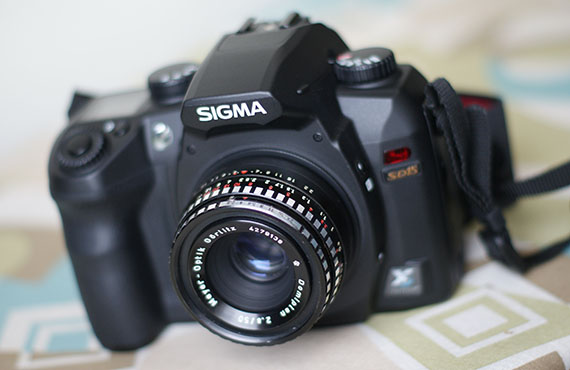 I can be quick about this lens; it is *not* worth your time, no matter how cool it looks. Its only redeeming points would be its low size and weight, which make it a good portable lens.

And that’s… pretty much all the good that I have to say about it.

The Domiplan simply does not excell on any level. And though it’s not a terrible lens, there is just no reason to choose it over any other 50mm prime you might have. But lets take a closer look.

First of, it’a a manual lens, which means that just turning the aperture dial won’t actually change the aperture, if you are using this lens on a modern dslr. A little tinkering can fix this problem though, so this may not be a major anoyance for some.

The biggest aperture is f2.8, which is a bit slow for a 50mm. F2 or f1.8 lenses are more common, and as far as old m42 lenses go, even f1.4 primes are quite affordable. Sadly, as far as I can tell, at f2.8 both my Takumar and Helios-44m will produce sharper images.

Focussing is a bit of a pain, due the positioning of the aperture ring right in front of the focus ring. It’s almost impossible to focus without accidentally changing the aperture setting. Also, with no rubbery grip present, it’s just hard to tell what you are doing in the first place. Both rings do move smoothly though, after who knows how many years of wear and tear, which indicates decent build quality. It always amazes me just how good it feels to *use* these old lenses, compared to their grippy plastic modern successors.

Looking at the images, at f8 the center sharpness is not horrible at all. But again, most or all other lenses will provide a similar quality at that aperture setting. Here’s the whole image:

And here’s the crop: (focus is on the red fabric)

And one more shot at f8 below:

In the end, I won’t discard the lens. I got it for €3,- from a local photography store, which makes the price/performace just fine. And it still looks cool on the camera. But 9 out of 10 times, I will opt for another lens before this one.